This blog will remain here for archival purposes.

Posted by adamjmac at 3:31 PM No comments:

Michelle Cormier has sent an e-mail:
"I have some sad news to share, Edgar Poirier passed away last night. 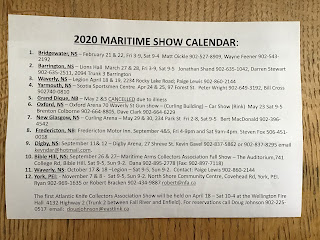 CLICK HERE TO READ MORE
Posted by Bert deVink at 8:42 PM No comments:

The 2019 Atlantic Championships were held on August 31 and September 1 in New Brunswick on Batouche Range. On September 2 the Mini-Palma Canada vs. USA match was held.

These two matches had a record-breaking turnout of 33 competitors from NB, PEI, PQ, NS and the New England states. On Day 1 the competitors shot the Lady Slipper and the Bluenose matches (which represent PEI and NS, respectively) at 300m, 500m and 600m. With scattered clouds and low wind, shooters were able to get a good feel for the range conditions. Day 2 included the Herring Choker Match (representing NB) at 300m, 500m and 600m and the Down East which is two matches at 900m. Clear skies and a hot sun made the mirage the talk of the day, visible even with the naked eye.

On Monday, competitors donned their rain gear and shot the Canada vs. New England USA Mini-Palma match at 900m. Pete De Santis captained the USA team and John Marshall of Nova Scotia captained the Canadian team. Three matches were shot with no breaks, as shooters tried to beat the rain (which they barely did). Team Canada made a strong showing and won overall by 111 points. Top individual shooters in the team matches were Stephen Landry (USA) in TR (3Vs ahead of Mark McMullin) and Stephen McCalmont (USA) in F/TR, two points ahead of Gord Holloway.

Held at the same time as the Mini-Palma team match was a special match for any individual that wanted to shoot. Kris Feng, Ken Geddes & Ken Kyle shot three relays at 900m. Kris Feng (PE) had the highest overall score and took home a unique vintage RNBRA medal.

Thank you to the Pete De Santis and the USA Team for traveling to NB for this special match. It was great fun to see old friends and new faces. There were several USA shooters who had never shot at 900m before this weekend and we enjoyed sharing that experience with them.

Thanks to Dollard for being RSO and to Mark McMullin for providing an excellent barbeque lunch all three days (in between shooting relays and winning the Down East match in TR). Also thanks to Conrad Leroux for arranging all the medals for this event.

Congratulations guys, this is very fine shooting indeed!! New Brunswick shooters are proud of you!!

Posted by Bert deVink at 6:22 PM No comments:

This match was originally scheduled for August 10 but was held the following day due to inclement weather including thunder storms.

Thanks to Michelle for sending the results and some pics of the match.

"I'm very glad we rescheduled from Saturday to Sunday, the weather yesterday was severe and quite a bit of hail as well.  This morning was a bit chilly, but quickly warmed up.  The cloud/sun mix made for some interesting conditions.

Both Ken Kyle and Kris Feng were in attendance today, and both are leaving tomorrow for Ottawa.  We wish them luck and safe travels!"


Ron Surette, with help from Michelle, organized the match and was the match director and Chief Range Officer. The match was shot at 300, 500 and 600 meters on the ranges in St. Antoine.


The RNBRA Fullbore Section invites you to the 2019 Atlantic Championship and Mini-Palma Match held on August 31 through September 2 at 5 CDSB Gagetown, Oromocto, New Brunswick.

On Saturday and Sunday we will be shooting The Atlantic Championship which includes four matches representing the Atlantic provinces. The match fee is $110, payable at registration. Round count will be 132 rounds including sighters (all matches will be 2+10). Awards will be held at dinner on Sunday evening in Fredericton (exact location TBD).

On Monday we will be shooting the Mini-Palma, is a traditional team match between Atlantic Canada and Eastern United States; it will be held on Monday, September 2. Each country will select one team to compete that includes 6 target rifle shooters and 4 F-class shooters. There will be three relays shot at 900m; round count will be 51 rounds per shooter (including sighters). The awards ceremony will be held Monday afternoon at the range.

The Canadian Mini-Palma team will be selected on Sunday based on results from the Atlantic Championship. Held concurrently with the Mini-Palma will be a separate individual match which anyone not shooting the Mini-Palma is welcome to attend. There will be one medal for the highest score of all classes shooting this match.

All matches will be held at Batouche Range on electronic targets. Shooters are required to bring a wifi-enabled device (tablet, smartphone, laptop, etc).

A BBQ lunch will be provided on all three days.

These matches were originally scheduled to be in PEI, but due to unforeseen circumstances with the DND Alexandra Range availability, they have been moved to New Brunswick. If you have already registered for PEI and can still attend, you will receive a refund for the reduced match fee.

Please extend this invitation on our behalf to your team members, coaches, assistants and guests. Pre-registration is required for both matches. RSVP to myself by responding to this email. Attached is an official invitation letter for those travelling across the border. Hope to see you all in NB,

RESULTS WILL BE POSTED AS SOON AS THEY BECOME AVAILABLE.
Posted by Bert deVink at 2:38 PM No comments:

Thanks to JC Gautreau for sending these results and pics.
It was a hot day on Saturday in St. Gabriel for the Gautreau 600 with 14 shooters attending.
Debbie Gautreau made a wonderful Barbque and everyone had a wonderful time shooting, eating, rejuvenating friendships and making new shooting friends.
The mirage and heat were definitely difficult shooting conditions and the winds were not particularly helpful in peaking through the mirage - a few puffs here and there hardly cleared the mirage.
Shooting took place over 600m with 3 relays of 15 (possible 225V45). 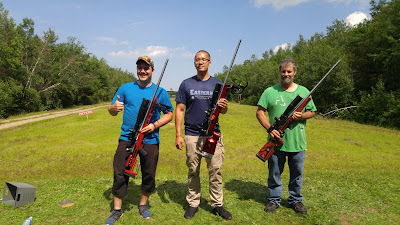 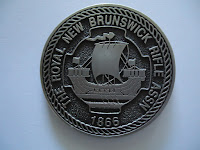 RESULTS WILL POSTED AS SOON AS THEY BECOME AVAILABLE

From Laura Kaderly:
"We are excited to announce that registration is now open for the 2019 Eastern Canada F-Class Championships!
The event is being held on Base Gagetown in New Brunswick from Friday June 28 - Sunday June 30.
Follow this link for registration: http://www.easternfclass.ca/registration.html
All the details are on the website. If you attended last year, the course of fire and schedule willbe the same as 2018.
We will be shooting on the ShotMarker electronic target system.
Space is limited, so be sure to register early. Feel free to share this with anyone who may be interested.
Questions? Send an email to the Match Director, Gordon Holloway, at president@rnbra.ca.
Follow us on Facebook for the latest updates: www.facebook.com/easternfclass
Hope to see you in June!
This is a quick announcement that the Eastern Canada F-Class Championships have been changed to
Saturday June 29, Sunday June 30 and Monday July 1. This change was necessary to accommodate
military training events at CFB Gagetown.
Eastern F-Class Committee"
Posted by Bert deVink at 11:46 AM No comments:

SEARCH THIS SITE AND LINKS